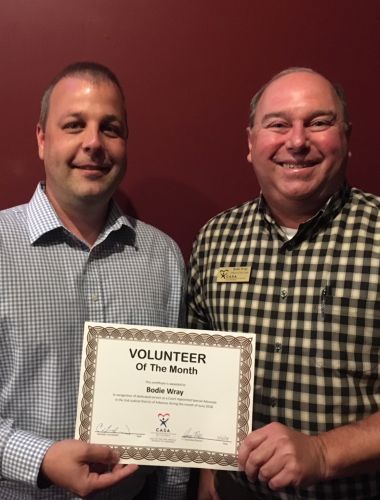 The Court Appointed Special Advocate (CASA) program of the Second Judicial District has selected Bodie Wray as its Volunteer of the Month for June. Bodie has served as a CASA volunteer since September of 2016. Volunteers serve as sworn officers of the court, and help to investigate and gather information on cases when children are removed from a home due to abuse or neglect. The CASA information is provided to a judge who makes the decision whether appropriate steps have been taken to return the children to the home or to find them new, safe and permanent homes. “Becoming child advocates was a way for my wife and I to volunteer as a couple. We both love children and believed that we could be a positive influence in helping underprivileged children. As we learned more about CASA we felt the calling to get involved to make a difference in a child’s life”, Wray said. When asked what the best part about being a CASA was he responded “being involved with children who are reunited with parents has been the most satisfying in knowing that they have a home and someone to love them. For the children in group homes with no family and no place to go, it is rewarding to be an advocate for them and see the positive changes that we can make in their life. Sometimes, it is the simplest things that can brighten a child’s life like being able to call and talk to someone when they have no one. “ Connie Lindley, who is Wray’s advocate coordinator, stated “Bodie is one of the most dependable volunteers we have. He is always looking out for the best interest of the children and has been that person the children can depend on.” Wray encourages others to become a CASA volunteer stating “this is an opportunity to be a positive influence for children going thru a very difficult time in their lives.” He and his wife, Jenafer, volunteer together and have found that working as a team has many advantages. “Not only did it make it easier to volunteer as we could share the duties of the case load it also created common time together.