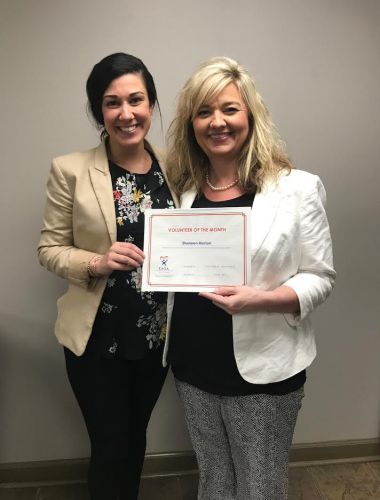 The Court Appointed Special Advocate (CASA) program of the Second Judicial District has selected Shannon Horton as its Volunteer of the Month for May 2017. Horton has served as a CASA volunteer since January 2017. Volunteers serve as sworn officers of the court, and help to investigate and gather information on cases when children are removed from a home due to abuse or neglect. “I had been thinking about becoming a CASA volunteer for years, but I wanted to wait until my child was older, so I would have more time to invest. I knew this year was the perfect timing for me, mentally and situationally. I am passionate about working with children and wanted to be a voice for a child,” Horton said. Jerri Mae Willis, Horton’s Advocate Coordinator said Horton worked hard to get a sibling group placed with a grandmother out of state. “That took calling the ICPC people in the grandmother’s state and in Little Rock and staying on top of it. Instead of it taking six months for this process, she and the DHS Program Assistant got this done in two short months; she called and emailed both states until they made it happen!” When asked what surprised her most about her volunteer experience with CASA, Horton states, “It has actually surprised me how much the skills I use at work are being used here in my volunteer work: the researching, the investigating, the need to stay organized and on top of things.” Horton added, “It is such a cool feeling to see the hard work you put in advocating for these children. To see them taken care of, to see them happy; it feels like something I have never felt before. It is indescribable. They slowly just become your children and that’s my job, to do everything I can to protect these children.” Horton is from Jonesboro, Arkansas. She enjoys hanging out with her husband and son when she is not volunteering with CASA.