Volunteer of the Month - February 2018 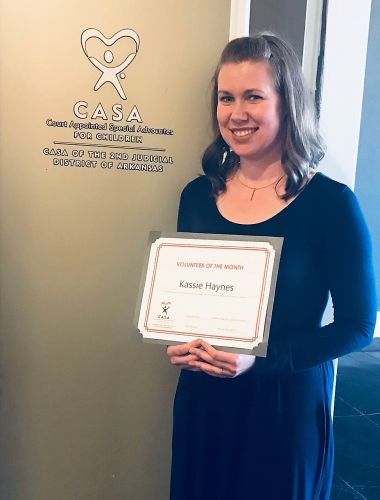 Volunteer of the Month - February 2018

The Court Appointed Special Advocate (CASA) program of the Second Judicial District has selected Kassie Haynes as the Volunteer of the Month for January. Kassie has served as a CASA volunteer since August 2017. Volunteers serve as sworn officers of the court, and help to investigate and gather information on cases when children are removed from a home due to abuse or neglect. The CASA information is provided to a judge who makes the decision whether appropriate steps have been taken to return the children to the home or to find them new, safe and permanent homes. “I love working with children and have a special place in my heart for kids in foster care. I know how over-burdened our entire system is and being a CASA volunteer is one way that I can help out”, Haynes said when asked why she volunteers. She added “I believe the experiences we have as children affect us the rest of our lives, so even though I cannot prevent terrible things to happening, I can advocate for their best interest and use my skills to make sure they are on the right track.” Kassie says she has known about CASA since she was a counselor at a middle school. A CASA volunteer came to her meet with her about one of her students. “I was amazed that there were people who volunteered to be another set of eyes and ears on a DCFS case and helped guide these children through a very difficult time in their lives”, stated Haynes. When she moved back to Northeast Arkansas she kept hearing advertisements about the need for CASA volunteers, but never felt like the time was right. Eventually, a co-worker who had worked for CASA before talked her into signing up and she did. Kassie says she has learned alot in working as a CASA and her first case has a very happy ending pending and she is excited about the upcoming adoption day! Kassie is married to Tom Haynes and they have two beautiful daughters. She works for Arkansas PROMISE, where she works with teenagers with disabilities to help them transition from high school to career.